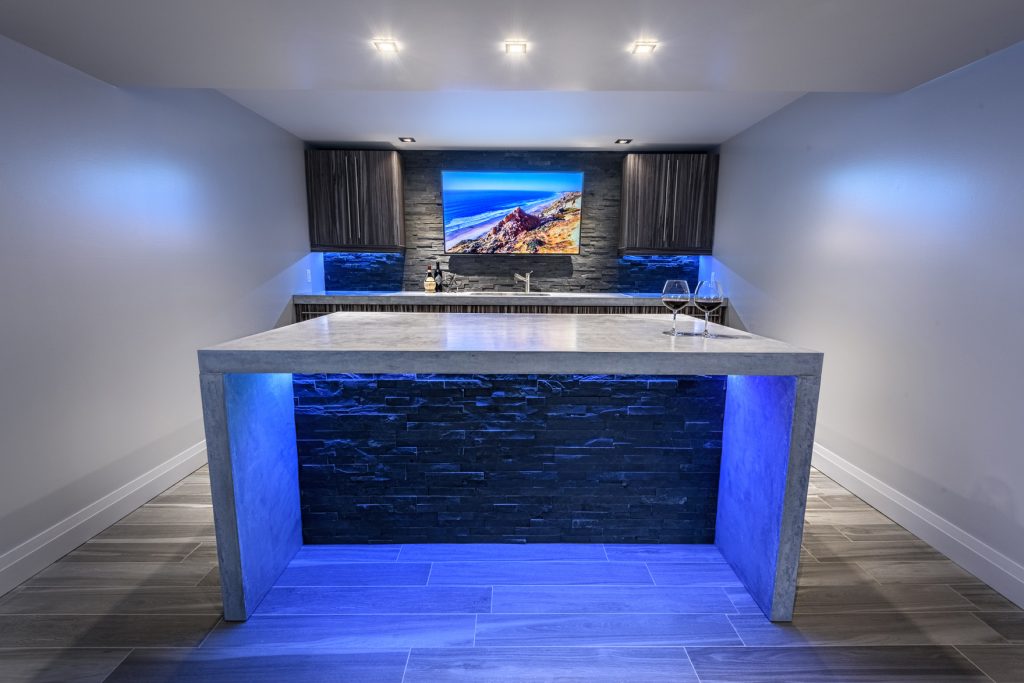 Getting into the Concrete Business

“It’s not just about learning concrete. You have to get good at everything that goes along with being a business owner if you want to make this work.”

Curtis and Jamie McCharles, of CMGC in Timmins, Ontario, got into the custom concrete business in a rather unexpected way. After taking in a football game while traveling around Ontario, they stopped off at a bar. That bar had a counter that was made of concrete, and it caught their attention.

Both Curtis and Jamie had plenty of experience working in the construction business and had launched CMGC in 2013. The business name stands for “Curtis McCharles General Carpenter,” and the couple handles all manner of home renovations. Nonetheless, Jamie describes being captivated by the beauty and versatility of concrete and its potential applications.

“We drove around looking for artisans who did it, and we couldn’t really find anyone,” Jamie McCharles said.

While they eventually found a weekend course in concrete, and plenty of information online, that didn’t provide the sort of in-depth education the pair were in search of. They decided to explore CCI as an option. A conversation with Jeff and Lane of CCI persuaded Jamie and Curtis that CCI’s program was what they were looking for.

“Speaking to Jeff and Lane: from their website, it was clear they didn’t want people in the class who weren’t ready to take that step. Just the professionalism that we saw in their website, in their content, that’s what spoke to us. We’ve always felt that way about the standard of work in our carpentry business.” 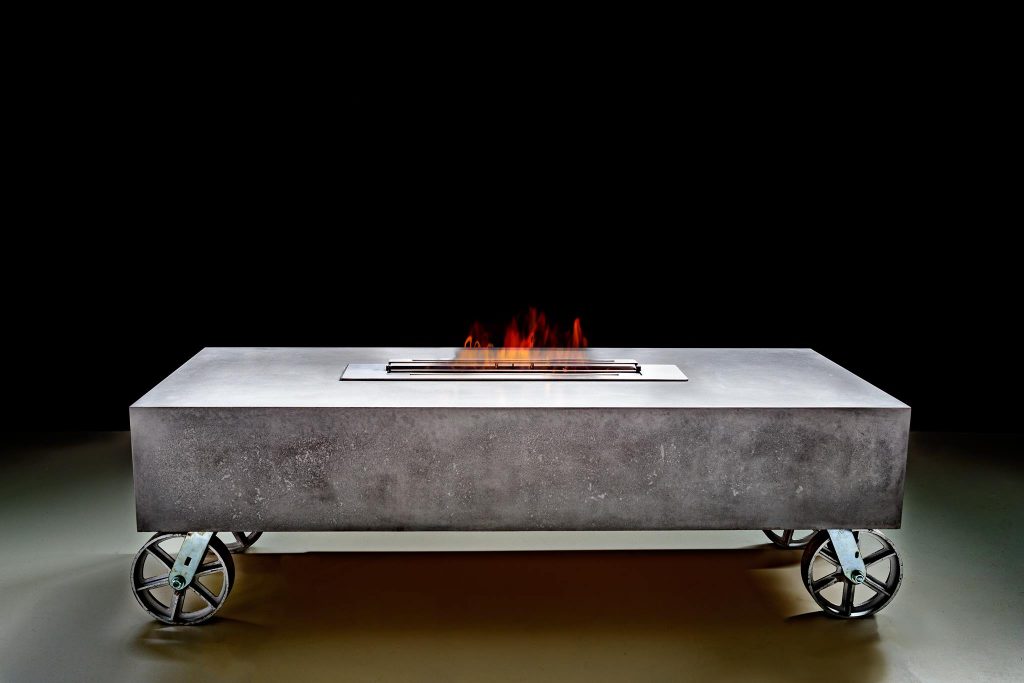 The conversation with CCI convinced Jamie and Curtis that CCI could give them the level of training they sought. “I’ll always remember that conversation. Curtis and I were sitting in a pickup truck and, when we got off the phone, we said ‘Yeah, this is going to be worth it.’”

Curtis and Jamie flew down to Raleigh to attend CCI, along with their son, who was less than a year old at the time. “We’re a team,” Jamie explains. “So he couldn’t leave me behind.”

Jamie said the class lived up to the expectations they’d developed from speaking with Lane and from CCI’s marketing. “There were no distractions or time wasting,” she said. “They want people who are serious about this and who want to learn. When we told Lane what our background was, she felt that it would really be an asset for us.”

Jamie and Curtis work as a team in every aspect of their business, which has proven an asset, as well. As involved as working in custom concrete can be, there’s a lot more to being successful in the business than being knowledgeable about GFRC.

“We didn’t just have to learn this industry,” Jamie says. “We had to become entrepreneurs, marketing experts, smart business people. We had to build a network. It’s not just about learning concrete. You have to get good at everything that goes along with being a business owner if you want to make this work. 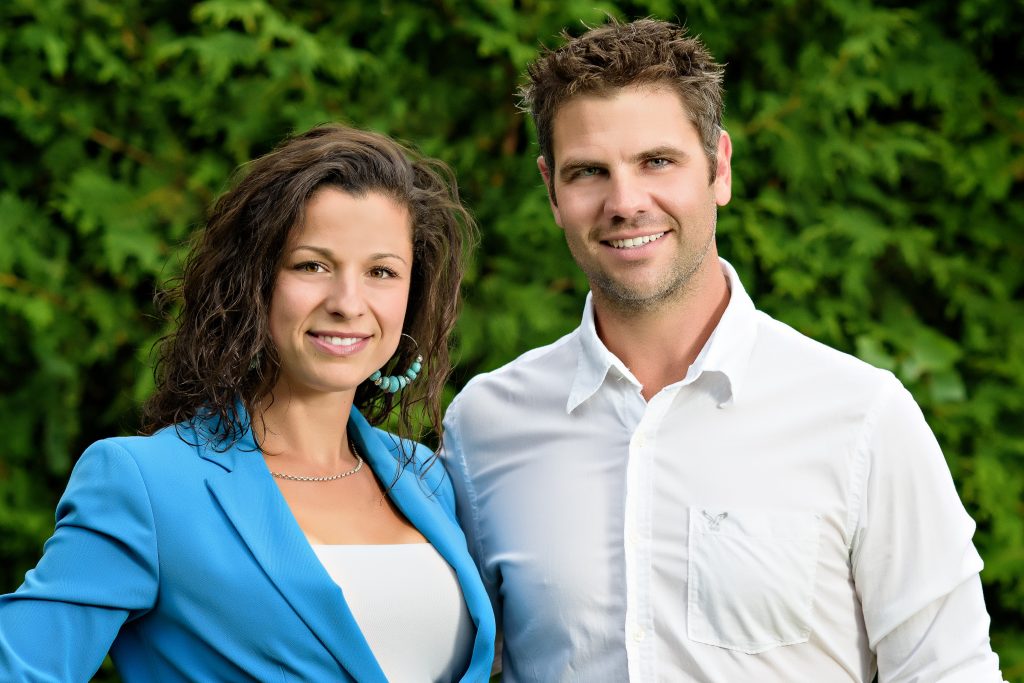 The artisans behind CMGC

How CMGC Approaches Their Work and Clients

“That’s what special about concrete: good concrete is made by people who care.”

While CMGC sets high standards for their work, they also put a strong emphasis on building connections with their clients.

“We’ve been very lucky,” Jamie says. “After each of our projects, we walk away with a new set of friends. Our close group of friends are our past clients.”

According to Jamie, building those relationships isn’t just about skill. Authenticity also plays a big part in establishing a reputation. “People can tell if you’re only in this for a buck or if you’re in it because you love what you do,” she says.

The quality and creativity of CMGC’s work reflects that artisanal love of their craft, with great attention being given to the details of each piece they produce. They strive to create concrete pieces that are truly made to suit the client.

“That’s our edge, our marketing tool,” Jamie explains. “We’ve committed ourselves to never making the same piece twice. Every piece is made to fit the space that we’ve seen, for the people that we’ve met. I have a harvester that sources timber and trees that we’ve described to him. We have steel suppliers that bring in the pieces we need. Everything’s thought out it in a way that makes each piece special to the client.”

In the end, Jamie says, it’s the attention to craft and creativity that prevents a piece from being generic. “You need a person who cares to do that,” she says. “That’s what special about concrete: good concrete is made by people who care.”

There was plenty of practice required for Curtis and Jamie to achieve their current level of skill. As many new concrete artisans have likely experienced themselves, the first piece CMGC produced, a laundry top for their own house, wasn’t their best work, but they found nostalgic value in it. 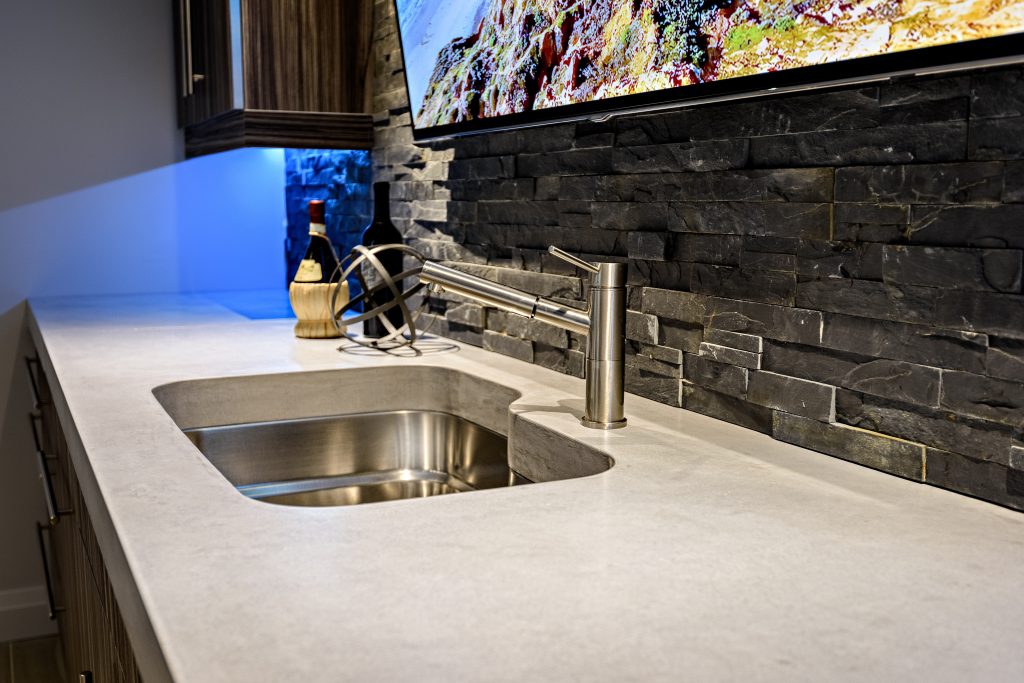 A beautiful sink made by CMGC

”We made every mistake we could have made,” Jamie laughs. “We installed it anyway. It’s a reminder of how far we’ve come.”

Reaching Out to a New Market and a Community of Professionals

“For the money a client spends to work with an artisan, they need to be one-hundred-percent confident.”

While CMGC has established a good reputation in their market and plans on expanding their reach through further marketing and their growing reputation, there have been challenges.

“No one really knew about concrete here,” Jamie says. “We’re eight hours north of large urban centers like Toronto which tend to set the trends and have the largest variety of products. Being so far away leaves places like Timmins a little behind when it comes to innovative or trending design. It was a challenge to bring this new product that no one had experienced before and develop our own skills and style with it and make that appealing to our market.”

The environment itself and the business’s location sometimes pose challenges, as well. “We’re dealing with different humidity, temperatures, finding products that can be delivered to Canada,” Jamie said. “There’s a huge learning curve.”

While CMGC has embraced those local challenges, they also feel that what they do reflects on the entire industry and they take that quite seriously.

“You have to go into it willing to make this product the best it can be,” she says. “If you don’t, then you’re hurting the entire industry. For the money a client spends to work with an artisan, they need to be one-hundred-percent confident.” 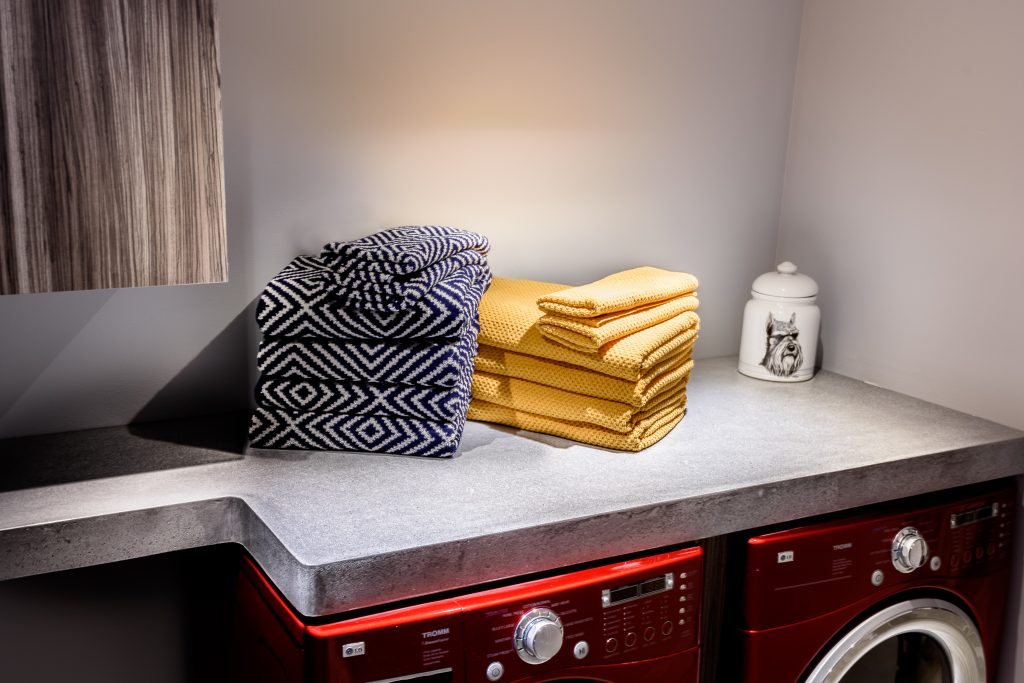 McCharles says that, in addition to feeling like they can reach out to other professionals for help when they need it, they also try to help other people in the industry, and Jamie stresses that such a spirit is beneficial across trades.

“When you’re a successful tradesperson and your priorities are based on doing a good job and being honest and providing people with the best that you can do, when you care about what you do and what you put out there, it doesn’t matter what industry you’re in,” she says. “There are carpenters and associated tradespeople we get along with wonderfully. It all depends upon what standards you put yourself on. When you’re communicating with people working to that same standard, it’s very easy to let information come and go.”

Still, for CMGC, it’s the end product, and all the work and creativity invested in it, that forges a connection between the client and the final product that CMGC delivers. According to Jamie, that’s not something that can be mass-produced, and there’s a genuine artistic spirit to how the couple approaches their work.

“If you go buy a print of a painting off of eBay,” she says, “yeah, it’ll look good, but it’s not going to speak to you in the same way as seeing the original painting in a gallery.”

CMGC’s web presence can be found on Facebook and at CMGC.works.