Getting training, building a clientele and a portfolio; anyone starting out in concrete countertops certainly has a lot to think about. For Judive and François Jean-Gilles, personal networking has been particularly significant in building their business. Growing their enterprise, Cygne Beton of Quebec, also required the father/daughter team to make connections that crossed both distance and languages, but the effort has certainly paid off in the end.

Judive got interested in the concrete countertop business in 2009. With a degree in business and fifteen years of experience in the banking world, she was well-equipped to launch a new enterprise, but needed to know more about GFRC. Her journey started with a book, but quickly came to incorporate formal training. She found The Concrete Countertop Institute on the web, but distance was an issue.

“I was looking at the 5-day Ultimate Concrete Countertop Training class, but it was a lot of money because I’m Canadian and would have had travel expenses,” she said. “So, I tried the online courses (How to Start (and Succeed at) a Business Making Concrete Countertops).” Judive had extensive experience in online training before she started taking classes at CCI, so she took to the online option quickly. 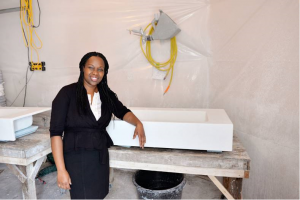 Once the distance barrier was taken care of, there was still a language barrier to deal with. “I used the books Lane and Jeff sent me,” Judive explained. “My father speaks French, so I had to translate. All the information about working with concrete I had to translate. There were other books I didn’t have to translate because they were about marketing, and that’s what I do.”

The effort Judive put into translating the CCI books helped François to take his vast experience working with concrete in a new direction. François had built foundations and houses out of concrete in Haiti, but hadn’t studied concrete in detail before. “We built upon his knowledge,” Judive said. “He had the experience, but now we had the theory.”

Growing a Business Through Partnerships

Between François and Judive’s extensive experience and their training from CCI, they were ready to launch Cygne Beton. As is the case for any fledgling business, however, finding clients was a concern. Fortunately, Judive is a member of several business networking organizations and she leveraged her relationships with other entrepreneurs, fostering partnerships that helped Cygne Beton, and the businesses it partners with, to succeed.

“I’m in an organization for women in business and we have a lot of meetings,” Judive said. “We have conferences and other activities. I’ve met a lot of clients and I meet contractors there. I can form partnerships with them and join my knowledge with theirs so that we can work as a team.”

Judive’s partnerships with other businesses have allowed her to offer clients package deals. When a client has a need that she cannot meet, Judive has people to rely upon who can fill in the gap, allowing both businesses to capitalize on opportunities that might otherwise be lost. She detailed one such situation in which her networking managed to turn a meeting with a client that didn’t go so well initially into a sale.

“I felt that the client didn’t really trust me,” she said. “I understand why. He wanted measurements; to know how I was going to do the job. I gave him some measurements, but I saw that he wasn’t happy. So, the next time I went, I took my designer and he was amazed.” Despite the client spending most of that second meeting talking to Judive’s designer, he was elated when Judive came back to discuss the project further. “Everything changed because trust was built,” she said. “He saw that I was well supported, that I have a team with me.” 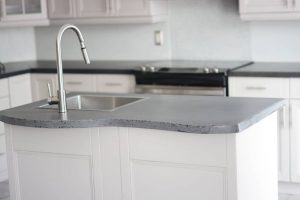 Judive recommends in-person networking for those launching their own business. “The web is good, but you don’t really build relationships online,” she said. “Before I had a portfolio, how could I advertise on the web? When I have more pictures, however, then I can advertise on the web.”

Also thanks to Judive’s networking, Cygne Beton will soon have a website. One of Judive’s business associates is a web designer and will be putting together a site for Cygne Beton in the near future.

In the meantime, Judive does make use of technology on a person-to-person level. She brings her iPad along with her to meetings with clients, which allows them to see the work she and her father have already completed. Nonetheless, Cygne Beton’s cooperative relationships with complimentary businesses are what helped the enterprise to really take off. “I’m building by giving and receiving,” she said. “Building really healthy relationships with other people who do something complimentary to what you do is really the best thing.”

Launching a business is always a significant undertaking, and the risk can be intimidating, but Judive and François have seen it pay off already and Cygne Beton is poised to grow even more. “It was a big decision,” Judive said, “but I’m so happy I did it.” 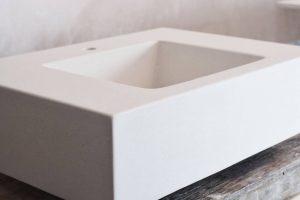