There is still a lot of confusion, even several years after CSA cements became popular in concrete countertops. The simple, chemical fact is that CSA cements do not produce calcium hydroxide, so pozzolans have nothing alkaline to activate them.

CSA additives are different. Materials such as Buzzi Unicem CSA must be blended with portland cement. Therefore, the basic chemistry and the side effects that stem from using portland cement are inherited. Pozzolans can be used, and are dosed based on the portion of portland cement used in the concrete.

While it’s possible to make strong, rapid setting concrete using Buzzi Unicem CSA, portland cement and pozzolan, this requires three ingredients, ingredients that each need to be sourced, shipped, dosed and weighed. I prefer simply to use a true CSA cement such as CTS Rapid Set® .

To test the interaction of a true CSA cement and pozzolans, in 2008 I performed compressive strength tests on a variety of concrete mixes that used CSA cement and VCAS pozzolan. The cylinders were prepared according to ASTM C192 standards and tested by an independent concrete testing laboratory. Three different concrete mixes were made with CSA cement where 20% of the cement was replaced by VCAS. (Note: The cement brand used, Ultimax Cement, no longer exists. The only 100% CSA cement available now is CTS Rapid Set® Cement.)

Test results showed that all of the mixes had a 30% loss in 1- and 7-day compressive strengths versus mixes that used only CSA cement. Rather than getting the strength increase seen with pozzolans and portland cement, you get a strength decrease. 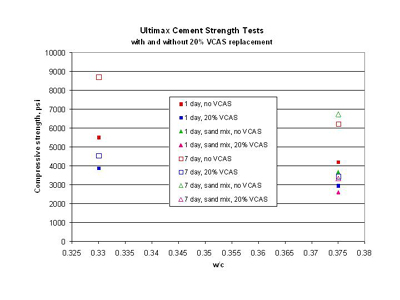