Self-consolidating concrete (SCC) is a highly flowable concrete that can spread through and around dense reinforcing under its own weight to adequately fill voids without segregation or excessive bleeding and without the need for significant vibration.

In the decorative concrete arena it has been used to produce castings with a high surface quality, often with few or no pinholes. Common reasons for choosing SCC are:

The flowability of SCC is measured in terms of spread instead of slump, because the material flows so readily. The slump flow test (ASTM C 1611) is similar to a standard slump test (ASTM C 143), but instead of measuring a vertical height change, a horizontal spread measurement is made instead.

Typical spread values range from about 20” to 30”. The spread in the photo below is over 29”. Note how there is almost no segregation, bleeding or variation. 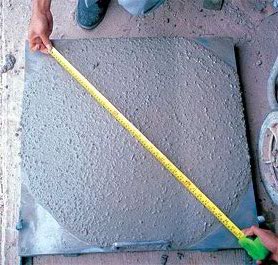 Other tests that are approved or are under consideration are the J-Ring (ASTM C 1621) and the Column Segregation test (ASTM C 1610).

How SCC is Made

SCC is achieved by designing a mix that has a low yield stress and an increased plastic viscosity (see Figure 1). In other words, the mix should require minimal force to initiate flow, yet have adequate cohesion to resist aggregate segregation and excess bleeding.

The yield stress is reduced by using an advanced synthetic high-range water-reducing admixture (HRWR), also known as superplasticizer. The viscosity of the paste is increased by using a viscosity-modifying admixture (VMA) or by increasing the percentage of fines incorporated into the SCC mix design. 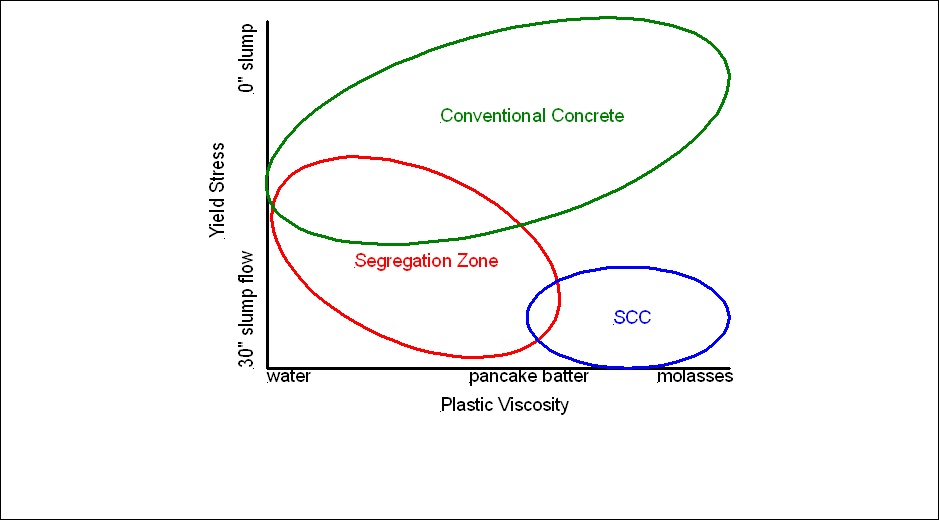 The preferred admixture for reducing yield stress in self-consolidating concrete is a polycarboxylate-based admixture (superplasticizer). This is due to its superior water-reduction capabilities and high early-strength gains at low dosing rates. This new generation of synthetic admixture has been specially designed to increase the dispersion of the cement particles. This aids in plasticity, strength and can also help with pigment dispersion.

Avoiding segregation through aggregate gradation and by increasing the amount of fines is possible, but it must be done carefully to preserve the SCC properties. A well graded aggregate distribution minimizes cement paste content as well as minimizes admixture dosage.

Other Considerations in SCC Mix Design

Excess moisture in the ingredients, especially the fine aggregates, can have a profound influence on the consistency of the mix. Small fluctuations in moisture content may lead to segregation or affect the mix’s ability to flow.