You know you need to weigh out ingredients for your concrete mix precisely, but did you know that scales can lie, and that cheap scales lie a lot?

Choosing a scale based on price alone can ultimately cost you hundreds or possibly even thousands of dollars. You may be using the wrong scale and not know it, because scales give you the illusion of precision when you don’t always have it. Digital readouts are very specific about what they display (it says it’s 7 grams!), but what you don’t know is that you may really have more or less material than you think (it’s really 6.8 grams, but the scale can only show that it’s 7). This can lead to problems, especially with colors. And making the wrong color concrete could mean re-doing an entire job.

Electronic digital balances (or just “scales”) are vital tools for measuring precise amounts of material, including aggregate, cement, water and pigments. Scales come in a variety of sizes, price ranges, capacities, levels of precision and cost. Choosing the right ones can save you money, time and give you more control over your concrete.

Balances/scales weigh an object by matching its weight against one or more reference weights. Mechanical balances use physical weights for direct comparison, whereas electronic balances store a calibration weight’s voltage signal in the electronics’ memory. 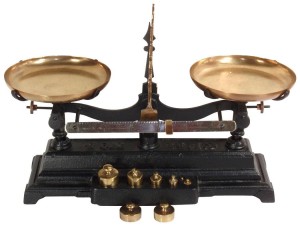 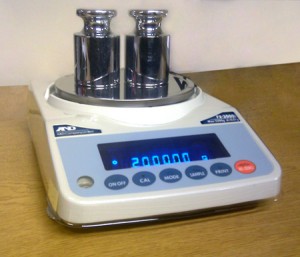 When a weight is placed on the digital scale’s weighing platform, a sensor called a load cell converts the force from the object being weighed into a voltage signal. This signal is then processed by the scale’s electronics to display the weight of the object in whatever units (grams, pounds, ounces, etc.) desired. The load cell and the electronics are the brain of the scale, and higher quality scales have better and more sensitive electronics.

Tools of the Trade

Often it’s necessary to use two or even three different scales when weighing out the ingredients for a batch of concrete. One scale (often a floor scale or a postal scale for packages) is used to weigh out heavier, bulk ingredients like sand and cement. And generally a smaller bench scale is used to weigh out smaller amounts of ingredients, like superplasticizer and pigments. This is because most scales have a limited weighing range that give the most accurate measurements. The range is defined by the scale’s capacity and readability (more on these later).

But there are times when very small quantities must be weighed out, often sub-gram amounts, and this can require a third, even more sensitive scale. These very sensitive scales are important when making color samples, as the quantities of pigments and other ingredients tend to be very small. 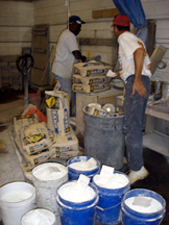 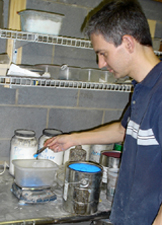 The reason it’s necessary to use more than one scale is that scales have two important parameters: capacity and readability.

The scale below has a capacity of 200 grams and a readability of 0.01 grams. (The label “d=0.01g” indicates the readability. Note also the 2 decimal places after the number.)

As another example, a postal scale may have a capacity of 150 pounds and a readability of 0.1 pound.

This is where a second, smaller scale becomes necessary. Just as with the larger scale, selection of the capacity and readability are important, so that the scale can do the job you’re expecting it to (and relying on).

Here are guidelines for your two essential scales:

Here are two examples to help you further understand readability:

In addition to capacity and readability, some other scale parameters and features are important to consider:

As with anything else, lower quality often means lower price, and quality scales can be pricey. Good quality scales are accurate, stay accurate and can be recalibrated as needed.

Measuring range is the difference between capacity and readability. For example:

Generally scales with a large measuring range between capacity and readability are higher quality and will cost a lot more.

It’s convenient but not necessary to buy a scale with a broad measuring range, as a broader range means two scales can do the job of three, but those two scales may cost just as much (or more) than three quality scales with smaller measuring ranges. Here’s an example of two broad-ranged scales you might equip your shop with:

Another example of three very good smaller-ranged scales you might equip your shop with:

It’s important that when selecting scales, that the “overlap” between two scales is large enough to allow for accurate measurements within the overlap range.

Most low-cost “value-priced” scales (like postal scales or kitchen scales) offer good capacities but poor readability. In addition, their true accuracy is unknown, and it’s rare they can be recalibrated. 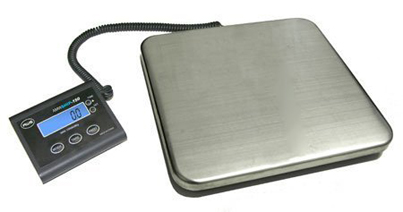 Inexpensive scales usually can’t be recalibrated. This means that you get what you get and if the scale changes over time (or it’s not right to begin with) you have no way of knowing that it’s wrong and no way of correcting it. 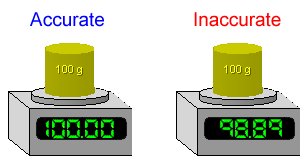 Just because a scale displays a number doesn’t necessarily mean that the number represents the true weight of the object being measured. Better quality scales have better electronics, higher quality components and are held to higher quality standards by their manufacturers. 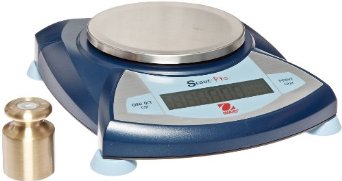 Digital scales are most accurate when weighing near the middle of their range, meaning you are not trying to weigh an object that has a weight close to the lower limits of the scale.

Most scales have an upper weight limit to protect the load cell from physical damage if too much weight is applied. The readings are still accurate when weighing near the upper limit though.

Scales run into trouble when you try to weigh small amounts of material that are very close to the readability of the scale, because a scale’s precision is half the value of its readability. This is an extremely important concept to understand.

The scale’s electronics convert the voltage from the load cell (which is an analog signal), into a digital signal, which has to be rounded up or down to comply with the readability chosen for that scale.

If a scale has a 1 gram readability:

This is the precision of the scale. In the previous example, a scale with a 1 gram readability has a 0.5 gram precision, half the value of the readability.

Rounding always occurs, but by selecting a scale with a small enough readability, the error from rounding becomes small and insignificant.

As another example, consider the scale graphed below: 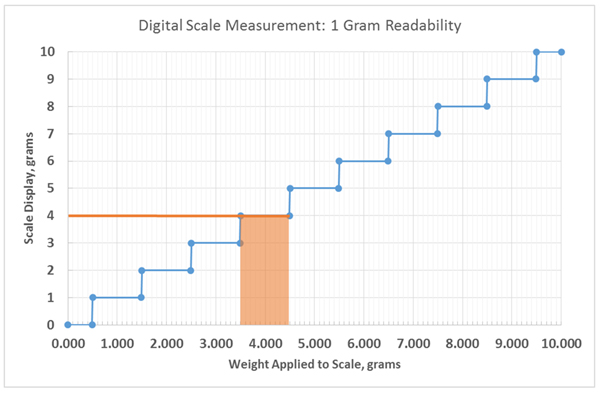 There’s a loss of precision due to rounding, and this is where errors come from when trying to weigh an object that’s too light for the scale to accurately measure.

Let’s use a common kitchen scale as an example. Often these have a 1 gram readability. As previously mentioned, trying to weigh out a small amount of pigment can create inaccuracy because of the inherent rounding that occurs.

A better question is does it matter that you are off by a little bit? If the scale you are using has a 0.5 gram precision (half of its readability), then you may have weighed out 99.50 grams, 100 grams or 100.49 grams, and any of those would have been displayed as 100 grams on your scale. Since the variation is small compared to the total amount of pigment weighed, the error in color (since you’re weighing out pigment) is very likely small.

But suppose you use the same scale for creating a new color and try to weigh out only 2 grams of pigment. Your scale will display 1.5, 1.9, 2.2 and 2.4 grams all as 2 grams. The wide variation in actual weight as compared to the small total amount of weight is far more serious and will have a profound effect on the concrete sample’s color.

Here is the formula to calculate error:

Let’s use the last example to calculate the magnitude of the error: If you had wanted to weigh out 2 grams of pigment but actually only weighed out 1.5 grams (but you didn’t kow it because the scale could only display 2 grams), your maximum error would be:

25% variation in pigmenting will have a profound effect on your colors!

If you wanted to weigh out exactly 100 grams of pigment on that same kitchen scale with a 1 gram readability (and a 0.5 gram precision), the error would be:

A 0.5% variation in pigmenting probably will not affect the appearance of your color samples.

So you can see how the error due to rounding drops to insignificant levels when you’re measuring weights much larger than the readability (and therefore the precision) of the scale.

The greatest error comes from measuring the least amount of weight the scale can display, or in this case, 1 gram. In this instance the error would be:

But if you weighed 10 grams on this same scale, the error would drop to 5%, a value that is much less significant and likely to be unnoticeable in most cases.

I recommend that you use scales with a readability that is at least 1/10th the weight of the smallest amount you anticipate weighing. That way the measuring error is never more than 5%.

Also, when selecting multiple scales, make sure the capacity of the smaller scales is at least 20 times the readability of the next larger scale.

The importance of this issue recently came to light when I visited some fellow creative concrete professionals’ shops. I witnessed them using basic kitchen scales to weigh out pigments.

The Buddy Rhodes Concrete Products pigments I recommend are extremely powerful, often requiring much less than 1% loading to create a color, especially subtle earth tones. In fact, some of my new color formulas for the most popular earth tone colors use as little as 0.0165% of certain pigments.

To see just how precise this is, imagine you are making a small amount of concrete for samples, say enough mist coat to cover 1 square foot. This would require about 1.4 lbs of mist coat, and a 0.0165% loading of pigment in that amount of concrete would be only 0.044 grams of pigment. You couldn’t weigh this out on a scale that only had a 0.1 gram readability. You would need a scale that can weigh to the 1/1000th (0.001) of a gram.

The following scales are good choices and are available from www.itinscales.com and www.affordablescales.com:

Equipping your shop with proper scales seems expensive, but it will save you money in the long run by enabling you to craft precisely colored, high quality creative concrete projects with confidence.