From year to year, the ingredients you use can vary, even if you buy the same ingredient from the same manufacturer. Pigments tend to be very consistent, but cements, especially gray cements, are not. Your colors that have less pigment, and therefore obtain most of their color from the cement, will exhibit more variability thann heavily pigmented colors. 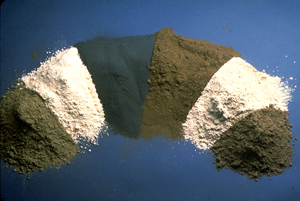 Admixtures like superplasticizers can influence color, not because they add color, but because they can act like dispersants, aiding in cement and pigment dispersion and the resulting color strength. Other admixtures usually have little effect on the color, like fibers, accelerators or retarders, however calcium chloride accelerators are an exception and should be avoided for this and other reasons.

Thorough and complete blending of all of the concrete ingredients is very important to achieving a uniform and consistent color. All of the pigment added to the mixer should be uniformly blended. If pigment is stuck to the sides of the mixer or in lumps or streaks then the resulting concrete will not be consistent with other batches nor will the color of that batch be uniform.

Adding liquid pigment to the mix water before adding the now pigmented mix water to the concrete can cause color inconsistency because a significant amount of the pigment usually remains in the bucket.

Forms for fluid concrete mixes must be watertight in order to achieve consistent colors. Otherwise, color variations will show where some of the concrete leaked out of the forms. Form materials themselves (the texture and porosity) can affect the color of the concrete too.

Everything that goes into making concrete has some effect on its appearance. Discipline, attention to detail and knowledge of good concrete practices will make your concrete countertops as consistent as possible.