I got started with concrete countertops the same way many people do: as a do-it-yourselfer.

In January 1999, Lane and I bought a house. It was a 1990s cookie-cutter subdivision house. The kitchen had white cabinets, white laminate countertops, white vinyl floors, white wallpaper with little pink roses. We decided we wanted to remodel the kitchen. Here is a before photo of the kitchen: 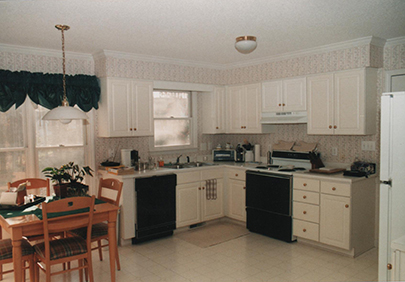 We had grand visions of moving doors, getting new cabinets, etc., then reality set in and we looked at just replacing the floor and redoing the countertops. Those had to be replaced, because the previous owner had cut on them and scratched them, and set a hot pot on them and scorched them.

My neighbor gave me a stack of home improvement magazines to help give us ideas, and in one of those magazines was an article about this guy in California named Buddy Rhodes. That was the first time I’d ever seen concrete that wasn’t gray, and it totally blew me away. To engineers, concrete is just numbers and a utilitarian material, but this concrete was beautiful.

That article changed my life. I’ve since had the privilege of meeting and getting to know Buddy Rhodes, the first time when I attended the very first concrete countertop industry gathering in 2001 in CA, and at many industry events after that. In May 2015, I had lunch with Buddy in San Francisco. 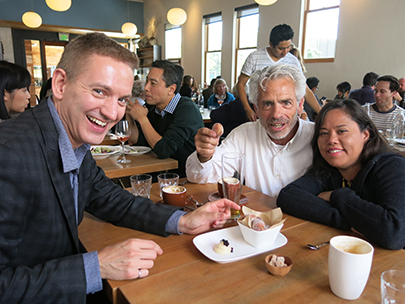 We were talking about how that article originally inspired me and wracking our brains to remember which article it was. He’s had lots of articles written about him and his work, and he continues to inspire with his signature style, like these stools, table and planter outside his office. 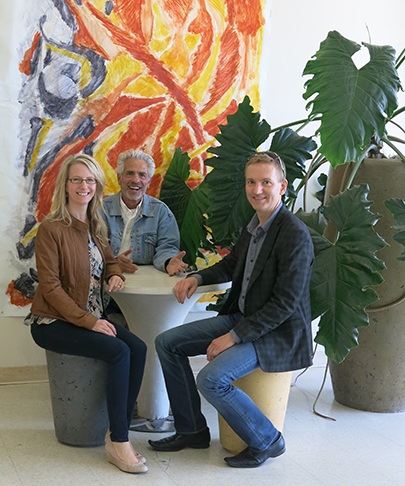 I have always thought the article was in Fine Homebuilding magazine, but I finally found it in the December 1998 issue of This Old House magazine. Here is that original article: 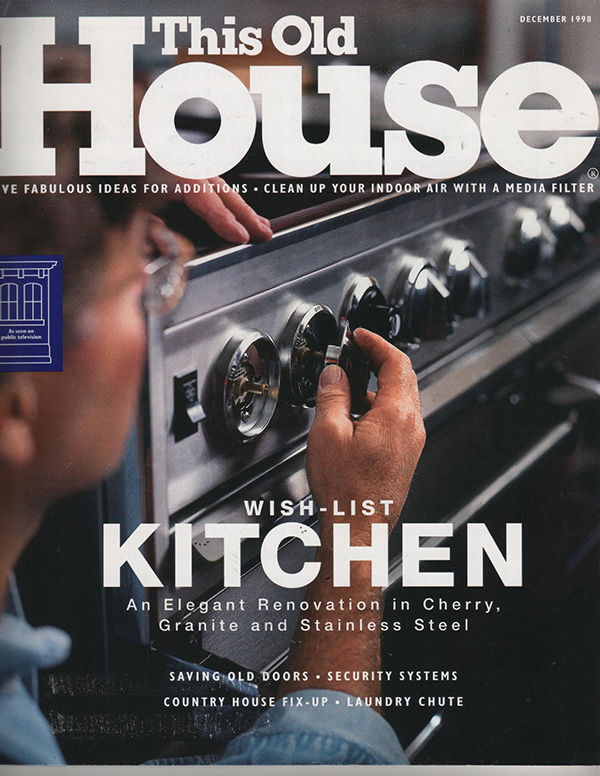 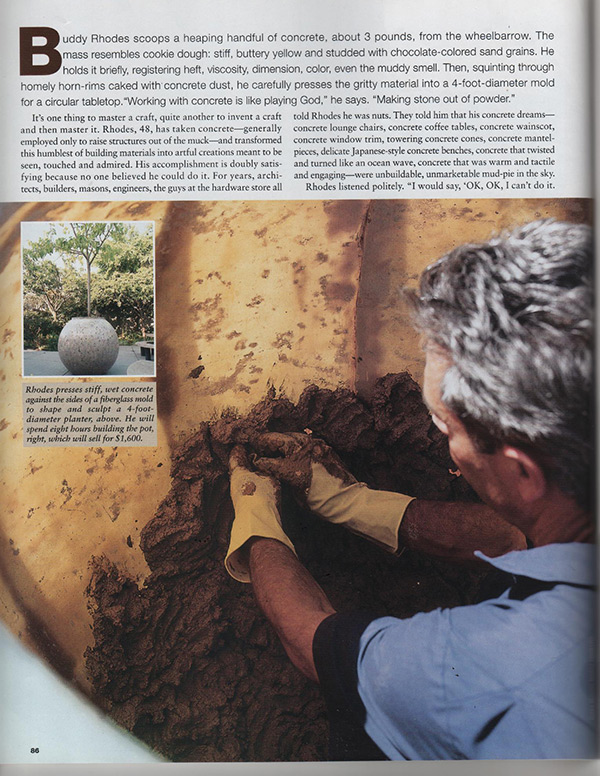 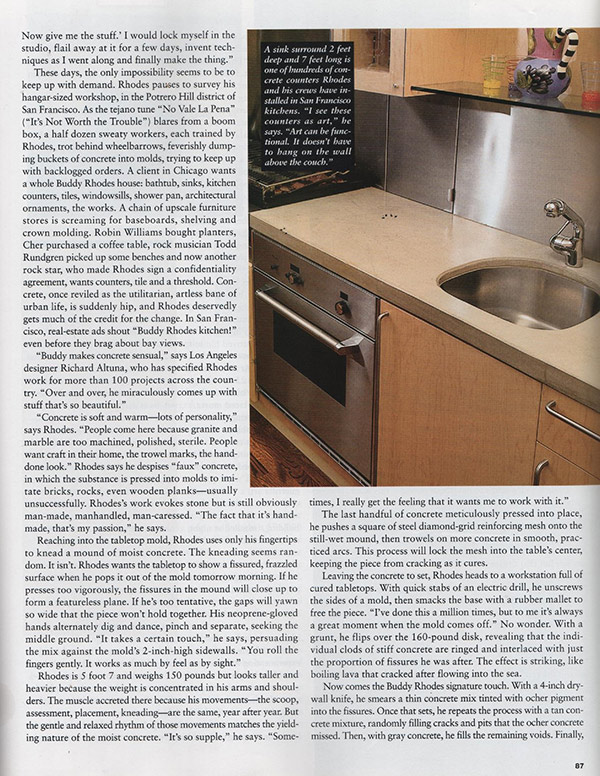 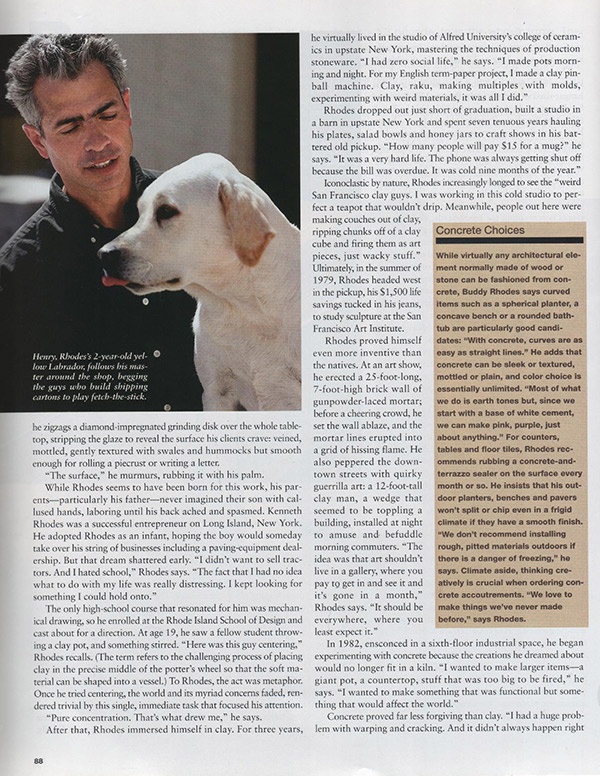 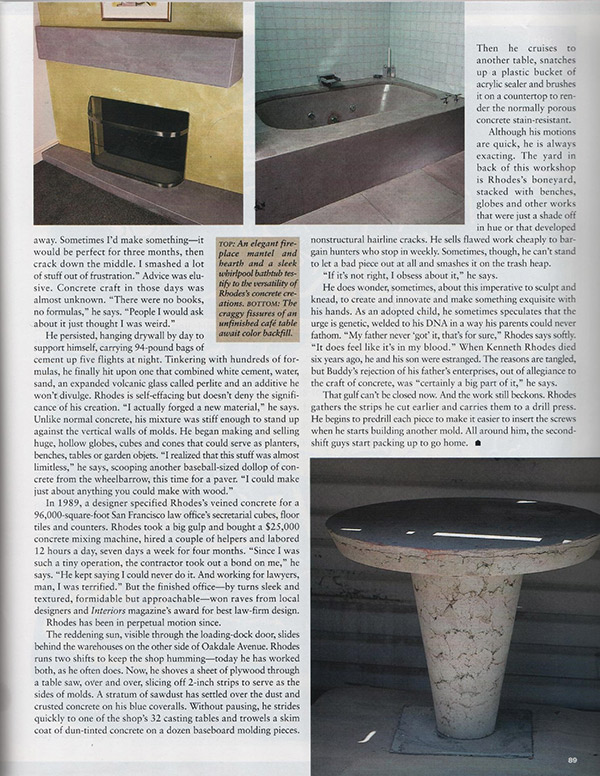 Several months later, about 8 months, I had finished the concrete countertop, paint, knobs, etc. Here is an after photo: 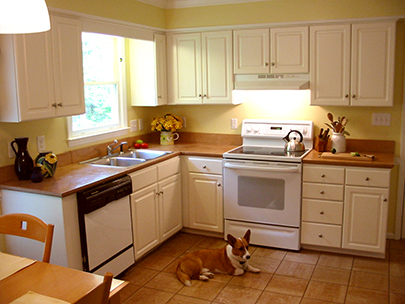 This first countertop took me so long because back in 1999 there were no books, no videos, no materials, no training classes, just a few anecdotes on discussion boards from people who had tried it for themselves.

All of those stories had something in common. “It turned out nice, but it stained”; “it worked, but the color didn’t turn out”; and, “it came out okay, but it cracked.” They all ended in “but”. I certainly didn’t want a countertop that did that, and I knew I had the background and knowledge to do better.

So instead of following the same problematic path, I started from first principles, and applied my engineering knowledge to figure out how to make concrete countertops that didn’t stain or crack, and didn’t require a lot of maintenance. I literally pulled my textbooks off the shelf, created spreadsheets to figure out the mix design and correct reinforcing, and finally, after 8 months, created my first concrete countertop.

In the course of doing all this research, I found that there were a handful of concrete countertop companies in major cities like San Francisco, Chicago, New York, Washington D.C., and Atlanta. I thought, maybe there’s an opportunity for this new, upcoming market. So I set up a website, and lo and behold, a few weeks later, I had my first customer. Here is a photo of my first countertop for a paying customer (scanned from a printed photo, like the photos of my kitchen – this was before digital cameras). 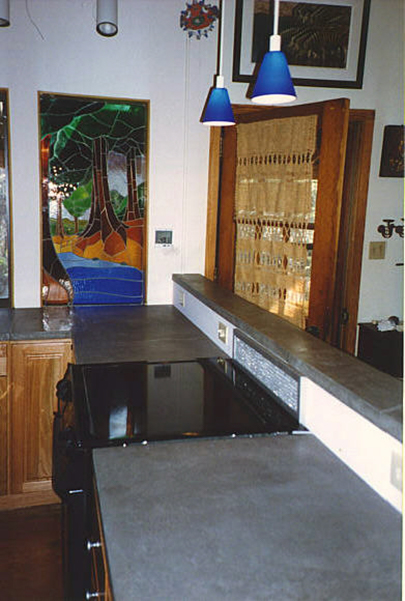 That’s how I got started with concrete countertops. Now, in June 2019, that was 20 years ago. So much has happened since then!

Now, the situation is very different. The World Wide Web (which barely existed in 1999 – Google had just gotten started, and there was no YouTube and no Facebook) has put a wealth of information at your fingertips. There are many books, videos and training classes on how to make concrete countertops. There are all sorts of products specifically for concrete countertops, from mixes to forming systems. There is too much information out there, and much of it is wrong.

But you don’t have to learn the hard way, nor do you have to piece together conflicting information from YouTube. If you want to start a business doing this, my Ultimate Creative Concrete Training provides a comprehensive system and deep understanding of not just how, but why, that has helped thousands of professionals from around the world start and succeed at a creative concrete business. If you just want to learn how to make a DIY concrete countertop, check out this video training.