Sometimes lines appear in precast concrete countertops where the steel reinforcing seems to show through. It can also happen in GFRC with scrim or foam coring. This is called ghosting.

The primary cause of ghosting is pushing reinforcing material into the concrete after the forms are filled, which causes a pumping action directly under the reinforcing. This pumping action disrupts and changes the cement paste, which in turn results in ghosting.

Another cause of ghosting is hanging the reinforcing in the forms and pouring the concrete through it. If the stream of concrete is split by the reinforcing but does not get a chance to remix below it, the aggregate gets pushed aside but the paste and cream flow back together. This causes a paste/mortar matrix change directly below the reinforcing that will cure slightly differently, resulting in ghosting.

A third way ghosting occurs is when reinforcing already buried in fresh concrete is moved or vibrated. The movement causes localized segregation, which in turn causes ghosting. 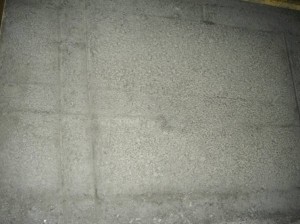 Ghosting demonstrated by deliberately pushing the reinforcing through the concrete 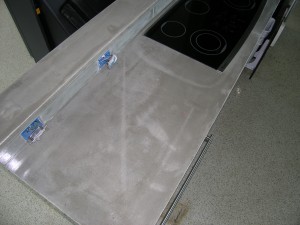 Ghosting in an actual installed project. The reinforcing isn’t even correct! Outlining the sink – please!

Other surface marks that resemble ghosting can be caused by leaky forms, excessive form release agent pooled or puddled in the forms, and items left on the curing concrete surface (like sponges, soda cans, polishing discs and hand pads). Anything that traps moisture in or on the concrete in some areas while other areas of the concrete remain uncovered and allowed to dry will cure differently. Concrete that is moist longer will cure more fully and the color will be more intense in those areas.

Unfortunately, once these surface marks occur, there is no way to remove them. Prevention is the only way to ensure that ghosting doesn’t happen.