I wrote recently about the planning stages for an outdoor gazebo bartop I’m doing here in the Cayman Islands. We’ve now poured the project, and I wanted to give you some insight into the mix we used and why.

This project required a large volume of concrete (nearly 8000 lbs, or 2 cubic yards), so I chose to have the local (and neighboring) concrete batch plant mix and deliver the concrete. 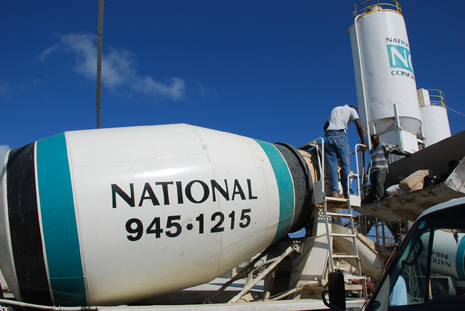 However, the concrete was based on white portland, and I felt that a standard construction mix would have been too inferior for the demands of a high quality concrete countertop. Therefore I chose to modify one of the batch plant’s mixes to suit my needs.

I spent some time with the plant’s engineer to learn more about their basic slab mix. Because the aggregates were local, I felt that using a mix that they had extensive experience with was smarter than trying to force fit an outside mix design that may or may not have worked the way I wanted it to. All I did was add a few admixtures to modify the base mix (and of course used white portland instead of gray portland). In addition to the base mix, I added pozzolan, a retarder, pigment and a shrinkage reducing admixture. I didn’t even need to use a superplasticizer, although we had one on hand if we needed to tweak the mix at the job.

Cast-in-place concrete needs special attention because it’s more difficult to control the environment during curing, and the concrete is exposed to greater environmental extremes (heat at least, but not cold here in Grand Cayman) than precast concrete used inside a home. Unlike sidewalks and floors, outdoor concrete countertops still have to look good and remain crack free.

I was casting a single slab over 45 feet long that wrapped around a hexagonal concrete gazebo. The thick concrete columns that hold up the roof penetrate the bartop, which wraps completely around each column. Crack control was very important, so I had to use a shrinkage reducing admixture to control the root cause of cracking, rather than hope fibers would do the job. I did not use fibers since ordinary fibers don’t prevent cracking anyway.

Here in the Cayman Islands it gets hot, but not super hot. Average daily temperatures are about 88 F (31 C) every day, all summer. It’s also very humid, which is a good thing, since the concrete doesn’t dry out as fast as when it’s hot and dry, like in a desert climate. To control early set I used a retarder, which gave me plenty of working time.

Although the truck delivered the concrete 10 feet from the job, it still had to be wheelbarrowed up to the bar and hand placed in buckets. 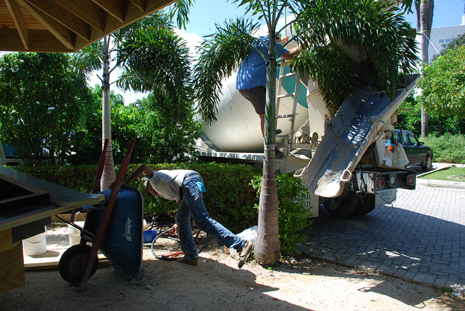 The workability of the concrete was around a 4″ slump when we started, and it was unchanged when we finished pouring 2 hours later. 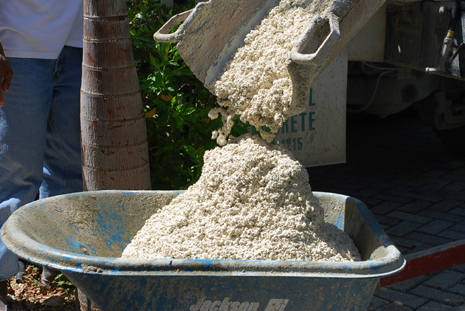 It took another 30 to 45 minutes to begin to firm up, but we left the job before it got to a hard trowel stage. Since we planned on grinding the concrete to expose the aggregate, all we did was screed and float in some decorative coarse aggregate and sliced coral into the top. 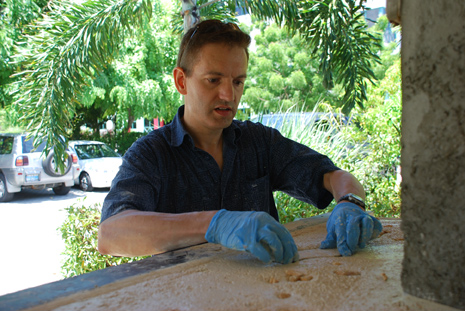 For more photos of the project, view the entire photo album on the CCI Facebook page.

Click here for a free seminar including a specific cast in place mix design.