Drying is an important process that must be managed and understood in order to avoid problems. At certain times drying is to be avoided, whereas at other times it is necessary. Understanding how temperature, dew point and humidity levels work together will shed light on how you can manage drying.

It’s well known that in hot conditions things dry out fast. So during the summer months (and for some of us summer temperatures have already arrived) it’s vital to make sure bare, exposed concrete that’s still curing stays moist. On the other hand, cold temperatures make it harder to dry things out. Cold concrete takes much longer to dry out because water does not evaporate as fast.

Dew Point is the air temperature at which the air is saturated with water vapor. Warm air can “hold” more water than cold air. When air at a given temperature can’t hold any more water it is fully saturated and is at 100% relative humidity. The air isn’t holding onto the water vapor. What’s being described is really the temperature when water vapor levels reach the saturation point.

Air flow rate is important, because as water evaporates, the layer of air above the water (or damp concrete) gradually becomes more saturated with water vapor. When evaporated moisture levels reach saturation drying essentially stops. Air flow increases the evaporation rate by “flushing” away the stagnant moist air above the concrete.
The following graph shows the relationship between air temperature, dew point temperature and relative humidity. 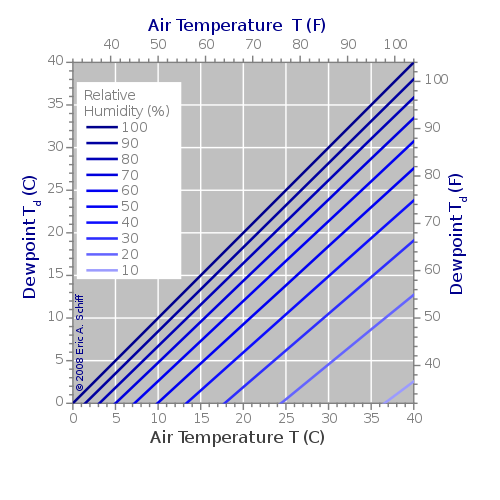 When concrete is covered in plastic, the air trapped under the plastic quickly becomes saturated with water vapor. When this happens drying essentially stops.

When concrete dries out, the suction forces developed when water evaporates from the pores in the concrete can actually crush weak cement paste. The longer the concrete remains moist, the greater its strength and the greater the resistance to the suction forces. This means fewer cracks and less shrinkage and curling. Longer wet curing also reduces pore size, which means less moisture is available to evaporate and that the moisture has a harder time escaping out of the concrete.

Drying
Some sealers need concrete to be dry in order to stick properly. And some sealers will not cure properly if there is too much moisture in the concrete.

Temperature and relative humidity are important factors to pay attention to so that your concrete dries to the degree you need it to so that the all-important sealer performs the way you and your client expect it to.

If your shop is cold (like most shops are in the winter), the evaporation rate is slower, and because most shops have open sources of water in them (trench drains, wet grinding areas, etc.), the relative humidity is generally higher than outdoor conditions. These limit how much drying occurs. If your shop is at 100% relative humidity it doesn’t matter how long you “dry” the concrete. It won’t lose moisture and dry out because the air surrounding the concrete can’t hold any more moisture.

Remember: wet concrete doesn’t dry out in small, cold shops with still air. Hot shops with moving air that has a low relative humidity will cause rapid drying.